Astrology: Looking forward into October 2017 through 2020 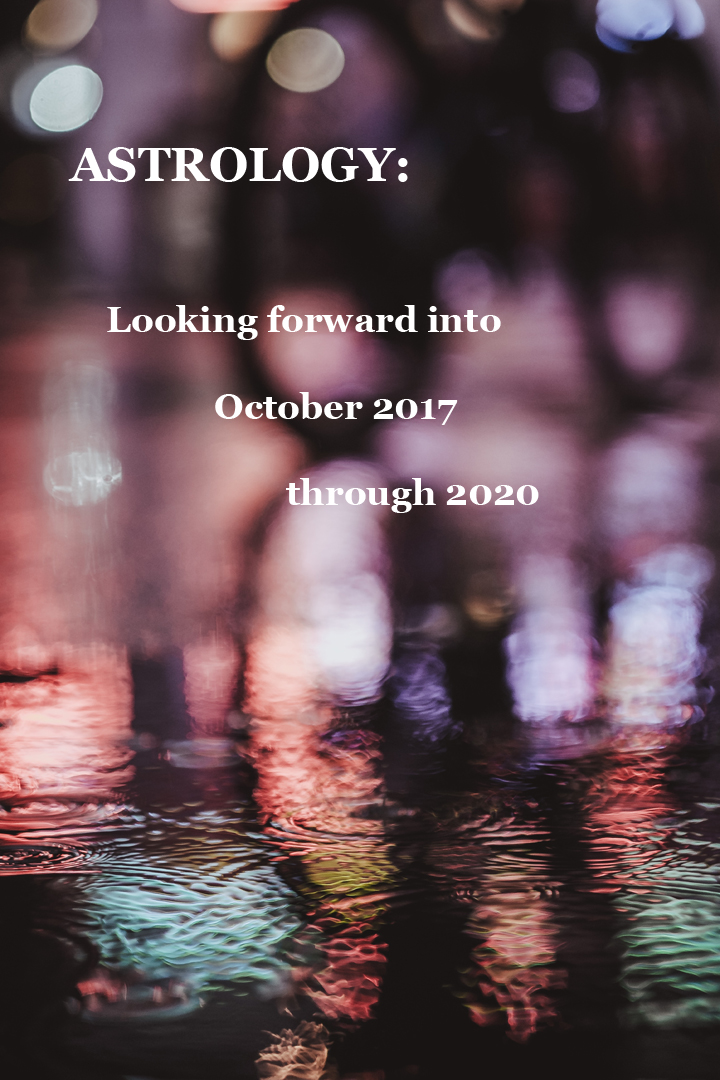 ASTROLOGY LOOKING FORWARD INTO OCTOBER 2017 THROUGH 2020.

I know that everyone is feeling bombarded and overloaded with information at the moment but in this space of relative calm (I know that sounds really strange to you because you do not think this feels calm.) I want to take a cold, hard, honest, look at the energy as we move into the end of the year and beyond. That is because I believe it is better to have a “heads up” rather than to not be prepared and then get caught off guard.

It is a tricky thing being a psychic. It is a daily ritual to try to find a balance between seeing things and not wanting to put it out information in a negative way but then also wanting to give information that can be of service in the bigger scheme of things.

So, know that this is my attempt to do just that. Please know that I am not attempting to be negative about anyone or anything because I look at these things as patterns of evolution that everyone goes through and these are just stages in life. Remember that the planets are always in motion and nothing in life will ever remain exactly the same, nor can you ever go back into another time and expression. Life always has beginnings, middles, and ends and that is just the way it goes. Do yourself a favor to take the personal and the superstitious out of it and deal as best you can with the facts. Also, please step out of mythological thinking and let’s deal with what is in front of us rather than project what you believe was someone’s interpretation about something far into the future from thousands of years ago. Be in this moment. Be in the now and together let’s find a way through.

A couple of facts need to be addressed as we move into the Fall and Winter of 2017. Those are that Jupiter (the planet of Expansion) is going into Scorpio (the sign of the abyss and death). If that does not sound exactly appealing then you would be right. All of us are going down into the dark, mysterious, waters of Scorpio and that always has a nasty tendency to stir up a lot of things that you thought were buried deep in the dark shadow of your most hidden self. Right now, would be a good time to begin to unearth those hidden things that you have pushed very far from your conscious mind and attempt to heal and come to terms with the truth of what you have glossed over in your life and the stories that you have been telling about those events, because the reality is going to smack all of us in the face shortly. That pattern of revealing the hidden darkness within will last until November 2018. So, it might be a good time to plan some personal growth workshops, yoga retreats, and meditation tools to help in this transformation.

Next comes the biggie. That is Saturn going into Capricorn on the 21st of December 2017. In dealing with such aspects, I prefer to look at the past and history as a marker for giving some insights into which way things might prefer to roll. This particular aspect creates energies that are about deprivation and hardship. In the past two of the major financial crashes happened as Saturn was late in Sagittarius (which it is right now until the end of December) or as Saturn was in Capricorn.

The 1929 Wall Street Crash happened in a similar time as we are experiencing right now. And the Great Depression happened once Saturn was in Capricorn. When Saturn and Uranus are positioned just right it creates a very negative connotation for economic prosperity.

The other historical moment came in the 1987 crash. You can imagine that there are others 1959-1961 with the recession in 1958. So, what we know is that Saturn transiting from Sagittarius to Capricorn involves major shifts in the financial reality.

Forward pacing all of this is a moment when Saturn (the planet of hard work, struggle, the lord of karma, and the planet of trials and tribulations) will conjunct or get very close to Pluto (the planet of the underworld, death, rebirth, transformation, and karma). That will be in December 2019 and again in early 2020. That particular moment is going to create a massive shift. What that might look like is at the moment … a guess. But I would say that you want now to be dealing with things in a different manner than the past patterns of complacency that many Americans have been living in. These are aspects that remind us that staying alive is about staying awake. Staying alert is the beginning to learn how to become a master in your own realm. Know that January 12, 2020 marks a turning point that will be defined in your life as, the moments before Jan 12, 2020 and the moments after that. I am not kidding. It is a major moment of awakened awareness. One unlike anything you have ever lived through.

The coming together of Saturn and Pluto forces a redistribution of power. Spiritually this moment is a rite of passage to determine who is the most qualified to be the custodian of resources. It calls for a very high level of personal integrity and morality combined with a constant test of your capacity and resilience. Saturn and Pluto combined is about the “right use of power”. Therefore, often before this moment is one of intense corruption and abuse. Greed seems to win over humanitarian values. People suffer. The poor, the elderly, and the children will suffer the most. There is often a complete disregard to moral standards and thus Saturn’s laws of karmically bringing consequences to misaligned actions often take the direction of the harshest of outcomes.

Another note to have in your mind is that later in 2020 Mars in Aries retrograding and then squaring the Saturn-Pluto conjunction can create serious political conflicts and even a global war. Expect leading up to this time and even after these moments there to be a huge rebellion on both in individual level (people leaving workplace jobs and reinventing themselves) and the collective level (worldwide protests that demand change.)

Jupiter will catch up to Pluto in April 2020 and that adds explosiveness and power to the situations. Pluto is like an atom bomb, small, compact but violent and powerful. Jupiter is the biggest fire gas giant. Together they will respond differently but they will become a force that will require the TRUTH regardless of whether it upsets anyone or not. Pluto keeps Jupiter grounded and will pop the bubble of Jupiter’s grandiosity. Spiritually, you will see with a rawness what only truth can do, the exposing of “false prophets”. If you do not walk your talk you will be broken down and humbled in the firestorm of these aspects.

We are coming into a time of dramatic planetary alignments whose intentions are to drastically change the destructive edges that are cutting this world up into pieces for the most powerful and wealthy. This type of change has no intention of being a smooth process, but the intention is to bring new solutions and completely alter the present paradigms. It is a rebirth that will gradually and at times painfully unfold. Take these moments to see clearly the writing on the wall and make choices that support your family’s safety and security.
~Suzanne Wagner~