INTUITIVE PATTERNS FOR THE MONTH OF JUNE 2017

Home Astrology/Numerology INTUITIVE PATTERNS FOR THE MONTH OF JUNE 2017 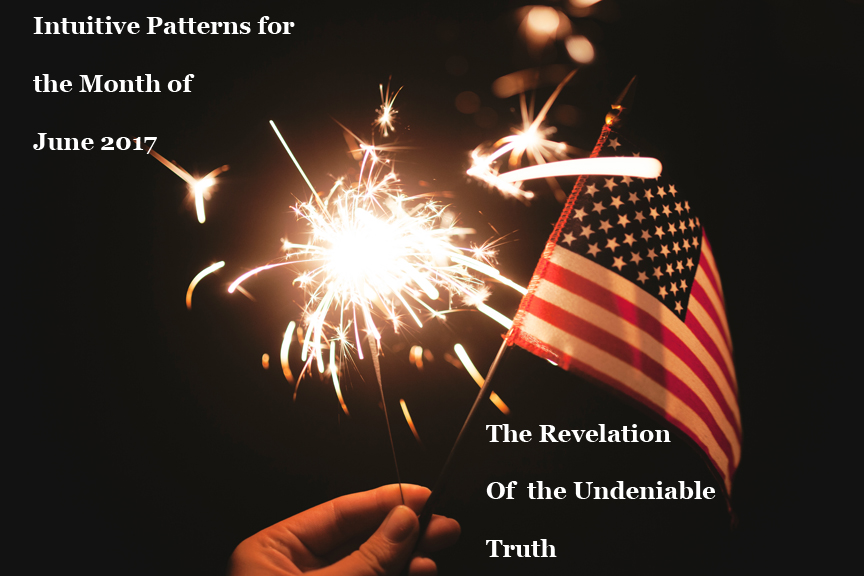 This month we begin a cycle that I want to call the “The Revelation of Undeniable Truth”. And that is from the astrological perspective not just the cards.

We are beginning a cycle of unspinning the “Spin” that many have been hypnotized by throughout the past year and a half. What has been a bombardment of chaotic conflicting information begins to be sorted out in a constructive and conscious way revealing the shadow that has been lurking below the surface. And that shadow has been manipulating many into the fear patterns of their own wounds collapsing the logical mind and allowing the mental clarity to become Jell-O.

If there was ever a time when you will recognize the degree of deception that is possible and that has held you in places of confusion and defending untruths then this will be the moment over the next 3 months.

Yes, Uranus and Pluto are co-culprits in the contribution to this wave of upset but you also want to look at this Saturn retrograde that is this Fatherly figure that wants to help you build something that will stand the test of time. And to do that he will tear down your most cherished illusions in order to rebuild a better and more aligned world. When Saturn is retrograde, he forces all of us to revisit and reflect on our choices and he will be doing that through till the end of August 2017. So, whether you like it or not you are being forced to take a hard look at what you have created.

Some of you will see a building being built painfully slow with many side-tracks, distractions, and cosmic redo’s. Others of you might see that you have built a house of cards and now it is crumbling to the ground, as it was never build on anything real or substantial. Regardless, Saturn is rarely a quick planet and more often than not, Saturn drags you through the rocks that you threw at others and the thorns that you pierced others with in your race to defend your ego. I do not expect this to be a fun process for any of us. But the journey to get to truth is often a road with many rocks and dangerous moments as all that is “good” is threatened but those who “know not what they do.”

We are in the mutable and malleable month of Gemini and as such it forces us to take a look at how our ideas, thoughts, and communications have created this mess of a reality that we are presently in. Gemini is known as the sign of the “student path” and that shows us that once again, a little knowledge is a very, very, dangerous thing. Youth believes it knows and makes rash judgments without looking beyond the façade of things and into the heart and truth of what lies below the surface. This is a great lesson in recognizing that often what you idealize is often rotten on the inside and now that is becoming clearer. Gemini is the Peter Pan of the zodiac and it is the reminder that choosing to be eternally a child is not possible and often an escape from the harsh reality that is the “real” world that you must mature into seeing and learning to deal with. Notice where your beliefs are locked in an ego position of “Never-Never Land”. Where are you stubbornly refusing to ever change or choose to deal with your inner pain that has placed you in a fictional, fabricated world in which others cannot reach you or connect with you in real and substantial ways? Refusal to change is a level of deep insecurity that this month begins to be dealt with in a practical and grounded way.

This month is very powerful is for all artists in all mediums. This is very fertile ground for creative endeavors and it is a powerful time to change your style and focus and open to your next level of becoming.

From around the 20th forward there is a breaking of emotions that allows for healing and truth telling. It is a time that packs an intense emotional punch and I expect lots of tears and truths, expressing pain and healing.

Honestly, I have been waiting for the moment forever.

The real challenge is that at the end of the month communication can get challenging again. Especially if you are trying to do too much too soon. Remember, Saturn is slow right now and things do not go as fast as you have wanted or believe is possible. Allow things to unfold in their natural and organic time. Do not make decision without first being in a very clear place first.

In the cards, I find an interesting pattern happening. I have never seen more fire cards and more cards that have horses in them. As a psychic, seeing the patterns is the beginning to being able to find the maps that explain subtle energy and to work with it in clear ways.

As I have the duality of white and black horses it reminds us that we are in a life and death moment in time. The dark energies are attempting to be on top and in control while the light and love of the white horse is striving to illuminate the darkness and show it for what it is. You are on a path that either is going to guide you deeper into the underworld or out of the underworld and into the light of truth. Horse is about freedom from mental and spiritual manipulation that has attempted to “tame” your wildness for its own end. Horse is all about “Personal Power” according to Jung. It might be time to lighten your load that you have been carrying. Perhaps you are carrying the karmic debt of others and perhaps now that is no longer applicable for your path. You might need to “get off your high horse” and reign in your overt and ego driven reality. The horse calls to reclaiming the freedoms that you have previously had and perhaps have given up in fear. It calls you to break free of the beliefs that hold you back and that do not allow for you to mature and grow into your potential. It reminds you that it is time to facilitate a spiritual awakening by teaching you that you must find a balance and symmetry between your desire for independence and your current responsibilities. Horse is associated with the wind and we have many stories of horses with wings. It reminds you that messages from the angelic realm are attempting to break through the rigidity of your mind. Horse reminds you that there are many hurdles in front of you but with conviction, focus, and momentum you will be able to travel to places unknown.

And then there are the Fire Cards. Yes, there is the obvious position that fire is about conflict, upset, confrontations, power plays, and upsets. Fire is about revolutions and radical changes. It is about emotions that boil over and respond in a way that is like a wave of a lava flow, and one that cannot be stopped. It tells of a cleansing time and a purification of toxic people and situations that are no longer wanted or needed. These other cards show the greedy and miserly people who always want to take more, even when they have enough, because of the emptiness and pain they hold on the inside. The rest of the cards show that a wave of change is happening and that you must find a place to commit to and resolve to hold a boundary that is healthy and life affirming. You must stand in your center in the storm of the duality that is going to attempt to tear down the old institutions that have been the base of our reality for so long. Those institutions are going to have to change and they will not be the same when this is over. So, recognize that you are on a journey and at this time you do not know where you are going or what it will look like once you get there. Let go of all pre-conceived notions and remember that just because you cannot see, does not mean that the universe and the angels don’t have a clear plan.