The Nature of Karma 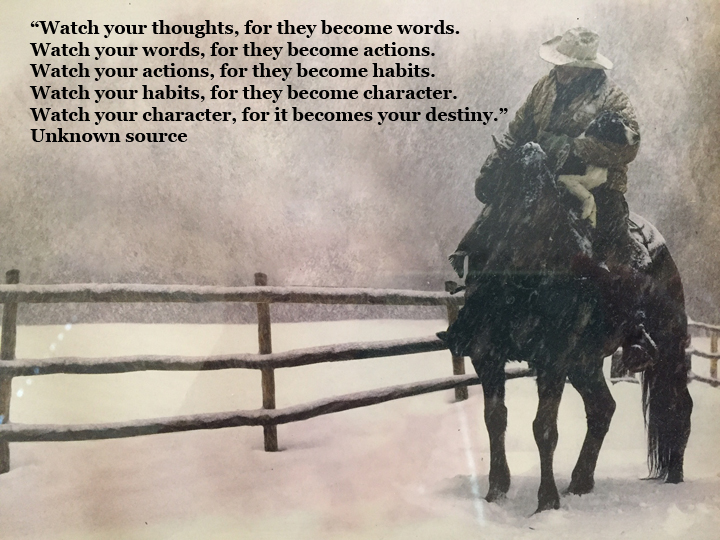 The shortest explanation of karma that I know is: ‘you get what you give’. In other words; whatever you do intentionally to others, a similar thing will happen to you in the future. Causing suffering to others (whether you are conscious of that choice or not, whether you are duped by another person or situation or not, whether your action is a result of being deceived or not) will cause suffering to you. And causing happiness to others will result in happiness for oneself.

From His Holiness the Dalai Lama’s book Path to Bliss:
“Some people misunderstand the concept of karma. The very term karma or action is a term of active force, which indicates that future events are within your own hands. Since action is a phenomenon that is committed by a person, a living being, it is within your own hands whether or not you engage in action.”

The idea behind karma is not only found in Buddhism and Hinduism; it seems that the Bible certainly conveys the same essence.

Do not be deceived: God cannot be mocked. A person reaps what he sows.

All things whatsoever you would that men should do to you,

do even so to them: for this is the law and the prophets.

The idea of accountability in our society is sorely lacking at this time in history. We look outside and in our fast paced society we do not believe that there are consequences to our actions. We see terrible things happening in the world and we have also had terrible things inflicted upon us and we do not see immediate consequences and apparent reciprocity. But never doubt that what goes around comes around eventually. And it shows up often at the most inopportune time when you are the weakest and the most down.

It is amazing to me to see that even good people cannot escape the karmic seeds of their own self-destruction from other lives even when then have conscious teachers right in front of them that counsel conscious choices, tolerance, and seeing beyond the veil of lies and delusions that the mind loves to become infected and infatuated with. We are destined to believe (from our ego) that we know better than the teacher, that we are right, and that we know what we want. But again, the self-illusions overtake the conscious mind and create actions of consequence that we often do not see the impact of for years and sometimes lifetimes.

This set of phrases is how I live my life by. It is also how I look at others. I look at how their thoughts reveal who they really are behind their words. I look at what their actions tell me about their deeper thoughts. I look at their habits and how they reflect the configuration of their soul’s conscious or unconscious progression. I look at their character and see if their motivations are selfless or self-involved. From there regardless of their wealth, fame, power, and influence, I look at their progressed destiny that they are creating in this lifetime and how that will impact them in the future.

As it is the holiday of Thanksgiving, which is a celebration of friends and family. What can you do to create a more positive expression of the karmic seeds you hold inside? How can you take action that will support another person who is suffering? What can you say or do that shows kindness and compassion to another?

Then take a look at yourself and look over the last year of your life. Can you objectively look at the choices and decisions that you have made and see if you have consciously or unconsciously activated positive or negative karma in your own life?

Remember, all choices and actions have an impact in the way your soul’s lessons will unfold. Intention is very important, but negative choices that create negative outcomes and hurt others do impact you even if you had the best of intentions. Obviously, the more positive your intention the smaller the negative karmic impact will translate into your aura but it will impact you none-the-less.

It is time to become more awake to the choices you have made that have created positive action or negative impact on others. Life is really very simple. If your choice actively hurts others, then it is wrong, and there is a karmic seed that is created that you will have to deal with at another time. Regardless of you’re mental reasoning. If your choice is life-affirming and supports all things that the Divine created on this planet then it will give you positive karmic seeds that will help your soul progress in the future and those seeds will be there when you need them the most.

Only by being conscious and overriding the internal anger can you step out of the karmic wheel. So many make choices from the knee-jerk reaction of their own ego and anger. Know that those choices will always have negative karma. You have to learn mental and emotional self-control. It is okay to feel what you feel but choices that have great impact on others and the world need to be made from a place of neutral observation.

Sometimes there are moments when you are unsure which way to turn. But again, it is actually very simple. Look at a person’s words, they tell you the internal mechanism and thoughts of a soul. Look at actions that a person does in a normal unguarded moment when they feel relaxed and see if those are the actions of someone you want to emulate. Because when you support such people you actually take on some of that karmic burden of that person’s actions, as you are energetically feeding into that reality construct making it bigger in this dimension. Look at the person’s character. Do you want to be in association with a person who ridicules others or ignores the suffering of others and only sees themselves? And finally, do you want your destiny to be tied to a person of terrible moral character for many lifetimes into the future?

You have a great gift, which is the power of choice. Your entire destiny is not completely in your hands but your conscious choices can make it more or less difficult for your soul’s progression towards enlightenment.
~Suzanne Wagner~

FATE IS IN OUR HANDS – A PARABLE

In a time long past, there was an old monk who, through diligent practice, had attained a certain degree of spiritual penetration.

He had a young novice who was about eight years old. One day the monk looked at the boy’s face and saw there that he would die within the next few months. Saddened by this, he told the boy to take a long holiday and go and visit his parents. ‘Take your time,’ said the monk. ‘Don’t hurry back.’ For he felt the boy should be with his family when he died.

Three months later, to his astonishment, the monk saw the boy walking back up the mountain. When he arrived he looked intently at his face and saw that they boy would now live to a ripe old age.

‘Tell me everything that happened while you were away,’ said the monk. So the boy started to tell of his journey down from the mountain. He told of villages and towns he passed through, of rivers forded and mountains climbed.

Then he told how one day he came upon a stream in flood. He noticed, as he tried to pick his way across the flowing stream, that a colony of ants had become trapped on a small island formed by the flooding stream. Moved by compassion for these poor creatures, he took a branch of a tree and laid it across one flow of the stream until it touched the little island. As the ants made their way across, the boy held the branch steady, until he was sure all the ants had escaped to dry land. Then he went on his way. ‘So,’ thought the old monk to himself, ‘that is why the gods have lengthened his days.’